Football Manager is always full of ups and downs, but there are moments in the game where you get that immense joy. I want to talk about the five most satisfying moments in Football Manager, which have really filled me with happiness.

This article is slightly different to my usual style. An old article I wrote on our previous site about why Football Manager is more than a game gave me inspiration to write this. We all know during this year and last year, especially that the World isn’t quite how it usually is. I wanted to shed some light of the positives and the escapism that comes from the game we all love.

The longevity of saves can often depend on how well your youth academy is. I believe this is one of the reasons I stay around at clubs for a while. I always want that youngster to come through, a local lad, performing in the youth team, a brief loan spell, a call up to international duty, a hero for the club. That gives me so much pride. Especially because they are so closely linked to you, the club and your save.

I don’t think it really matters what position the player is, but the fact they are a youth prodigy for your team. It also doesn’t matter what level of club you are at, as it still gives you that feeling of pride. Whether you are at Barcelona, Luton or Colo-Colo that pleasure of having a talented youngster come through the ranks is one of the most satisfying moments in Football Manager.

Beating the best teams in the World to a transfer target 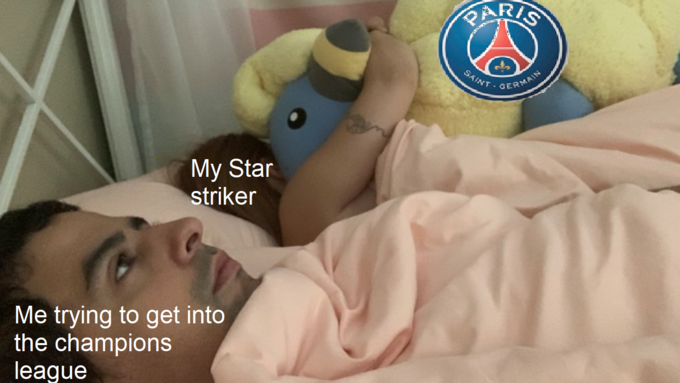 I had to include a meme in some capacity in the article. This just fits perfectly with it. We have all been there. Trying to sign the next best thing, and PSG come along and can offer triple what you offer. The worst part about it, is the fact the player rarely makes an appearance for the first team and leaves five years later. A lost soul, that’s what I’d call it.

Let’s ignore PSG and any other team trying to sign players. Lets focus on signing players that we shouldn’t really sign because other big teams are after the players. I always have to pinch myself when the player decides to join me, instead of one of the world’s best teams. I guess in real life this can happen, a lot of players want to move for game time, and progression. You might not be guaranteed that at one of these big clubs, especially with the competition on offer.

Normally the likes of PSG come in the next window and the player has a release clause, so he’s sold. But lets forget about the sad things, and focus on the positives. It’s always a good feeling to beat the teams who were trying to sign him, especially if he gets on the scoresheet. Is there a more satisfying moment in Football Manager?

Successfully retraining a player and them performing well

One of my favourite areas in game, retraining. An area I have had a keen interest for this years release and the year prior. In my head if a player isn’t good enough to be starting or back up, then they are usually sold, until now. I always try to create a space in the team for the player, and often that is down to retraining.

In particular, my strikers are often trained to be inside forwards or wingers. That’s just how I operate. It means less time looking for a player, and more time retraining a member of your squad to play in a new role. Of course this takes time, and some times it doesn’t work. However, when it does, it has to be one of the most satisfying moments in Football Manager.

The resources this has saved me over my saves is second to none. I revert a lot of my retraining to Old Lady Play’s article relating to players are people, this can be read here: Players Are People Too. It made me think of players differently. So when selling a player, I think what would his family be like if we were selling him? Sad, I know.

David vs Goliath. Underdog story. We all love it, and so do I! At the beginning of the season when you’re predicted to finish 18th, and expecting a tough relegation battle. To go on and win the league, or even finishing above these expectations. It is a satisfying feeling in Football Manager, and definitely gives so much joy. You expect it to all be doom and gloom, and it turns out to be far from that.

The Leicester story is one that will always stick with me. It can happen in real life. Defying the odds at all stages and going on to win the Premier League. We all have them moments in Football Manager. Like taking a lower league club to the Champions League, and on the way beating teams you never thought you could of. I love the game for this, it just keeps you invested.

It would be silly for me not to include wonderkids in to this article. That’s one of the reasons we all love Football Manager. Heading to South America to see a 17 year old who outshines his opposition and his team. Putting a bid in; the player joining when he is 18 and taking him on a journey. There is a feeling that I can’t quite describe, but I would imagine it would be like having a son and being incredibly proud of them. This is Football Manager after all, and getting attached to players is a normality.

On the flip side, this can often happen and then the player doesn’t quite reach the heights he is expected to. These things happen, not every player can turn in to that Club Legend otherwise what would the fun of that be?

I have one particular example of this in recent years and that was Rodrygo; who currently plays at Real Madrid. I remember seeing him on Football Manager and instantly searching him on Youtube, to see what he was actually like. The video I watched can be seen here: Rodrygo – Atacante – Santos FC. I was absolutely speechless when Real Madrid signed him. Speaking to a friend who I usually play FM with, we was both like, we should be scouts – it took a while to get back down from cloud nine, but rest assured, we aren’t scouts.

These are my top 5 satisfying moments in Football Manager. Playing the game differently is exactly why each experience is unique to each other. No two saves will ever be the same.

If you enjoyed this article, make sure to follow us: