Who will win the league? Will it be Liverpool, City? Who will go down? In this instalment, Football Manager Predicts the English Premier League.

Will Sergio Aguero end the season with The Golden Boot or will one of Liverpool’s majestic trio beat the Argentinian? Alisson or Ederson for Golden Glove, maybe De Gea? Lets find out what Football Manager predicts for the Premier League.

One thing to note: From the start date, It was impossible for me to see what happened in the play-off’s and every time I attempted it, Leeds were promoted. This is something I couldn’t change. So please take it with a pinch of salt. Manchester City appear to be marginal favourites, after their domestic quadruple. Will Man City have enough in their tank to win the league, again? I really don’t know.

All the newly promoted teams are predicted to go straight back down with a 1000-1 chance of winning the league. Stranger things have happened.

The Top 6 looks fairly stable, but the seventh spot is really open for that last Europa League spot.

I am expecting Liverpool to start the season strong, but with injuries to Becker it could be crucial that Man City take as much of an advantage as possible. I can’t see any of the teams between 7th and 10th finishing in the top 6. With some fantastic signings in the summer window, it might be them new players who make the difference. This is very interesting to say the least. Wolves look to be struggling and that will definitely be down to the sheer amount of games that they are expected to play with Europa. They beat FC Copenhagen in the Europa best placed qualifier and made it in to the group stages. They finished second in their group, falling short of Shalke, but ultimately qualify for the knockout stages. This has been a consequence on the leagues performance, where Wolves see themselves two points above relegation.

Man City continue their run of form, only losing one game thus far. They lost 3-2 to Everton with Richarlison, Iwobi and Bernard proving the difference for The Toffee’s.

Liverpool and Arsenal are level on points, but the Gunners have the upper hand with their fire power upfront and lead on goal difference.

Down at the lower end of the table, newly promoted Sheffield United haven’t messed about and see themselves in 13th. Where as, Leeds and Norwich are really struggling. Both Brighton and Southampton are struggling and could see themselves in the Championship next season.

It could be a very busy transfer window for all the clubs. It will be interesting to see who each club signs during the window. 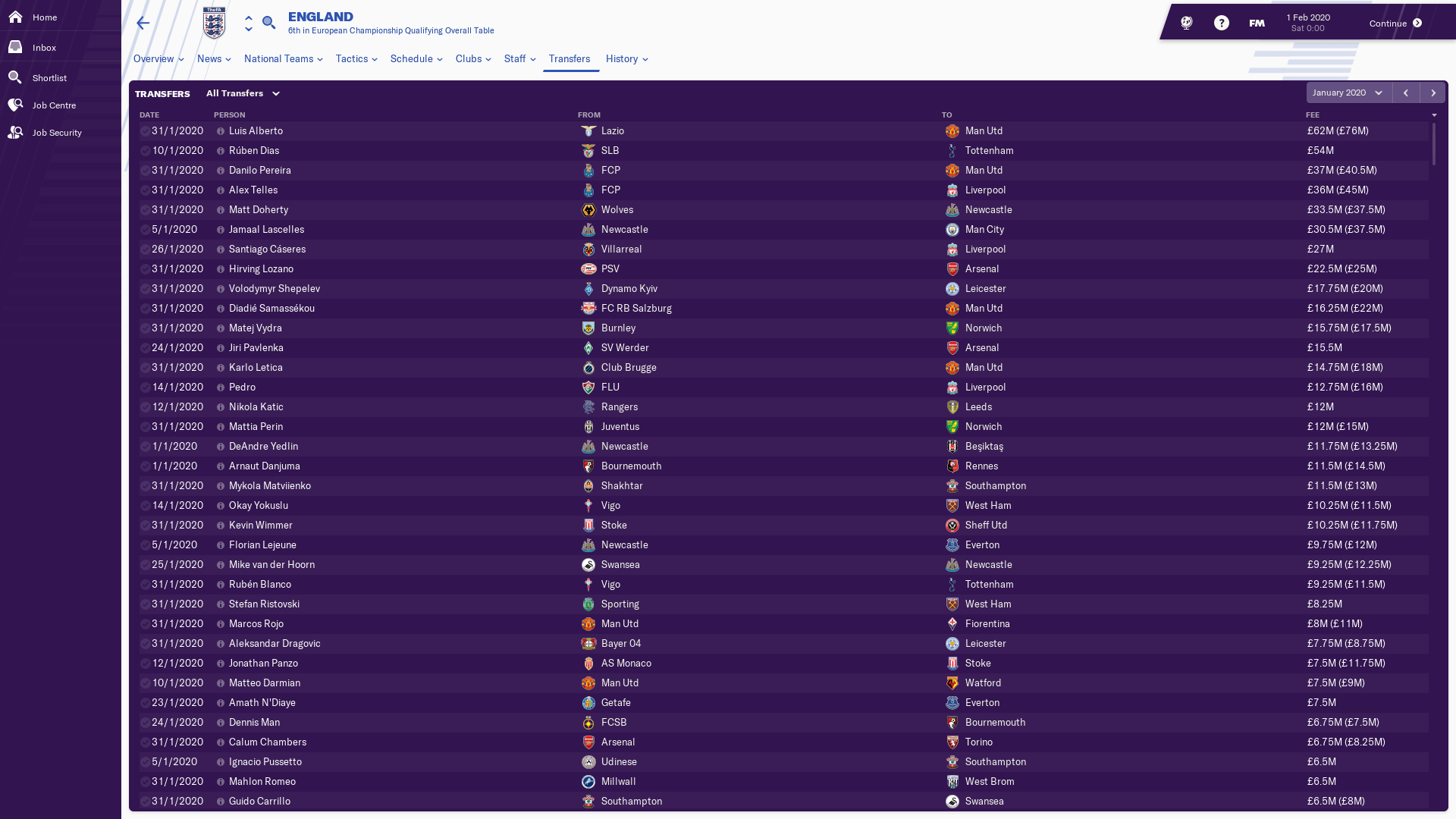 There were some incredibly big transfers in the January window with Manchester United looking like they wanted to sign anyone and everyone.

Attacking Midfielder Luis Alberto joins The Red Devils, as does Danilo Pereira, Diadié Samassékou, Karlo Letica and Mattias Svanberg. All but one were midfielders. This is an area where a lot of United fans wanted strengthened in the summer. This could be crucial if Manchester United want to get in to the Champions League.

Wolves Manager, Nuno Espírito Santo was unfortunately sacked due to the league performances. His replacement was none other than Marcelo Bielsa. Leeds had to replace their manager quick, and they did. Carlos Corberán changed his role from first team coach and was appointed manager. Man City do it! 100 Points – WOW! But let’s take a look at some of the other surprising results.

Let’s just talk about Bournemouth who have just secured Europa League football. Callum Wilson’s 20 goals will definitely have helped them. As will Daniel Strurridge’s who netted 12 times

There was five points, yes that’s right, five points that separated 17th from 9th. What a highly competitive season it’s been in the Premier League. West Ham were predicted to finish 9th and finished 17th. This could have went either way, but them five points cost them dearly.

Chelsea’s transfer ban and lack of Eden Hazard cost them dearly. They missed out on Europa League to Everton who beat them to it by a point. Frank Lampard’s sacking didn’t help. Chelsea should’ve expected a performance dip considering their lack of resources.

Norwich collecting 23 points over the season would be the sixth worst Premier League season, EVER. Massive credit has to go to Sheffield United, what an incredible debut season for them.

Liverpool were so close once again. Losing two games all season, and even beating Man City in the process. They fell just short of the hurdle.

I was not expecting Arsenal to finish third and Tottenham finish fifth. However, looking at the change in manager, the transition might not have been the easiest.

There are even some surprises in here. What a roller coaster of a season it has been.

Footballer of the Year

Manager of the Year

Players’ Player of the Year

Players’ Young Player of the Year

Players Team of the Year 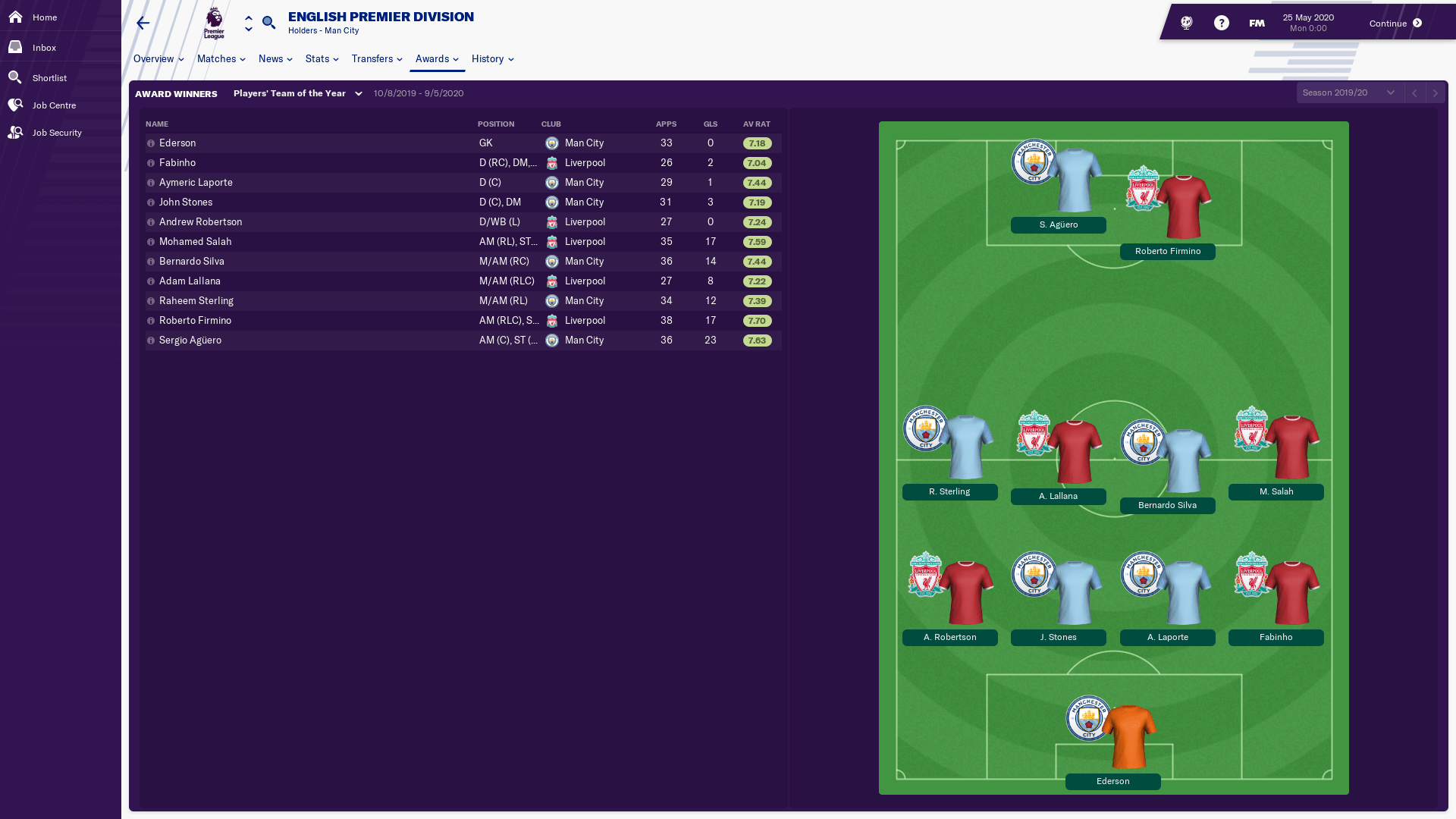 A Liverpool and Man City hybrid team. Imagine you faced this team. You’d be frightened to death, before seeing Lallana! What a team!

A massive thanks to FootballManagerForum for providing the database. You can find the database here.