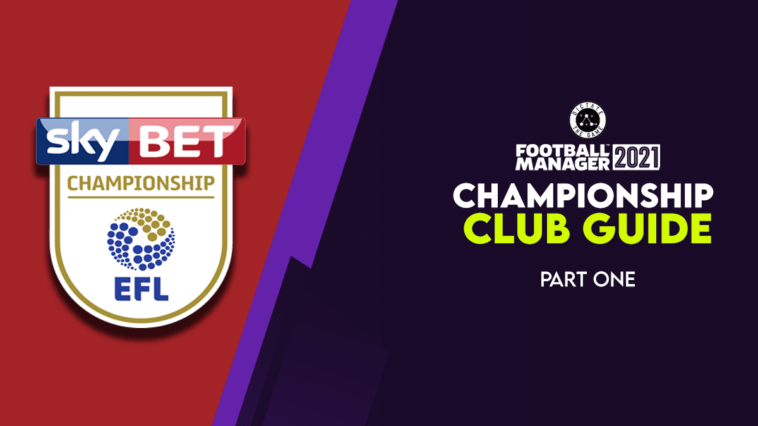 In this post we’ll be taking an in depth look at each club in the Championship, including an overview of the club, predicted finish, club vision and some key players, hot prospects and finally I’ll suggest a formation. Welcome to the Football Manager 2021 Championship Guide.

Barnsley were promoted to the Championship in 2019, on the back of a campaign that saw them finish second in League One under Daniel Stendel. Having only played in the top flight for a single season (1997-98), reaching the Premier League would be a huge achievement.

There’s a lack of depth at left back, and not much quality out wide, but Barnsley do have a lot of quality in the centre of the park, so it’s worth looking at using a formation with three CMs. Cauley Woodrow is capable of leading the line himself, so one up top is definitely an option. A fluid counter attacking style could work well here.

Birmingham City are championship regulars, this year will be their tenth season in a row in England’s second tier. Throughout the 00’s they were ritual yo-yo’ers, with three promotions and three relegations in ten seasons. Taking them back to the Premier League would be a tough ask.

The blues have excellent options at full back, as well as impressive options in the AM strata, so a counter-attacking 4-2-3-1 could be a great choice. Dan Crowley looks a great option to play at number 10, with Gardener and Kieftenbeld good options for functional central midfielders. Reaching the play-offs in your second season is a big ask, but the squad definitely has potential.

Premier League winners Blackburn Rovers find themselves stable again in the Championship after bouncing back from relegation in 2016. Rovers will have their eyes set on returning to the top flight, having been outside the Premier League since 2012. It may take a couple of seasons to reach, however.

With Bradley Dack and Adam Armstrong both exceptional options up front, it’s hard to stray from two up top. Nyambe adds quality at Right Back, and 4-4-2 just seems to fit the squad well. If you wanted to experiment slightly, you could try a variant of 5-3-2, with Lenihan Ayala and Williams all possessing the ability to play at centre half in the first team.

After being relegated last season, The Cherries will have aspirations of a swift return to the top flight. They have a strong squad for the division, but poorer facilities than you might imagine. Promotion is definitely the aim here, anything less and you could be in trouble.

The Bournemouth team picks itself, there is so much quality and depth here, you should have no problem selecting any formation. However, I think an attacking 4-4-2 would work wonders, with Brooks and Stanislas operating from the wings, and King and Solanke up front. There are plenty of options at left back, with Kelly and Rico both capable of playing in the first team.

Brentford had so many chances to win promotion last season and flopped every time, culminating in a 2-1 loss in extra time of the play-off final against Fulham. Promotion will be the aim again this season, but could be a tough ask with the loss of Ollie Watkins.

The Bees have plenty of depth in wide areas and a 4-3-3 seems a good fit for their central midfielders. Nørgaard is an excellent Deep Lying Playmaker who I would play in the DM strata, with Dasilva and Jensen adding quality and energy ahead of him. Ivan Toney is a capable striker, and with a technical squad, tiki-taka or a similar heavy possession tactic would be my choice here.

Bristol City have been building momentum in the Championship since their promotion from League One in 2015. The Robins will be eyeing the play-offs this year, but it will be a tough ask. They have a few great young prospects coming though so this could be a great club if you’re looking for a youth development save.

Bristol are strongest down the wings, and don’t have particularly great options at STC, so a 4-2-3-1 or 4-4-1-1 looks a good fit. They are particularly strong at centre back, with Alfie Mawson and Adrian Mariappa both great options. There is a lot of depth at the club, and therefore a lot of formations could work here.

Cardiff have been fluctuating between the Premier League and Championship for the last few years, with two promotions and relegations in eight years. The Bluebirds will have a tough time attempting to win promotion this season, but after finishing 5th last season, they will be expecting to finish similarly this time around.

Cardiff have a solid squad and potential to reach the top 6. They are strong at the front with players such as Harry Wilson, Junior Hoilett and Sheyi Ojo in wide areas, and Kieffer Moore upfront. They are a fairly physical with strong free-kick and corner takers. A direct attacking tactic could work really well here.

Coventry did exceptionally well to win League One last season especially when you consider they were playing their home games in Birmingham at St Andrew’s. This year they will be looking to consolidate and attempt to stay in the Championship. They also have an FA Cup win to their name, winning the ’87 final. Recreating that success could make for a great save.

Callum O’Hare is a great fit at AMC so I would be trying to include one here. Coventry have a great defence, McCallum and Dabo excellent options at full back or wing back. Considering you will be the weaker team in most games, backing the defence could be the way to go. 5-2-3 is also a good option if you want to include Jobello in the team, as O’Hare can also play on the left.

Derby have been banging on the Premier League door for a few seasons now, their closest being a 3rd place finish in 2014. The Rams expectations are pretty low compared with their predicted finish, so this could be a good save for someone inexperienced with Football Manager. Wayne Rooney adds a lot of quality to the side and there is a huge wave of young talent at the club.

In my opinion, Rooney fits best as an AMC who will not be asked to run very much. An Enganche is a great option here, with runners helping from the central positions, such as Sibley and Shinnie. The defence is pretty strong here, but you may need to bolster the forward line if you find you aren’t scoring many.

Huddesfield were relegated in 2019 on the back of a pretty poor second season in the Premier League. They finished 18th last year, and will be looking to improve on that this time around. Guiding them back to the Premier League could take a couple of seasons, but they’re capable of reaching those heights again

Fitting Mbenza, Bacuna, Pritchard and O’Brien into your team means you’ll be looking to play an AMC and two wide players, so a 4-2-3-1 or 4-4-1-1 looks good hear. I’d lean towards the latter, as you’ll be looking to defend more than you will attack with this Terriers side. Schindler and Stearman are solid centre halves, but lack pace, so you would be best playing without a high line.

Luton are a really interesting story. After three successive relegations from 2006 to 2009, they found themselves in the National League, owing to financial mismanagement at the club. Over the past few years Luton have clawed their way back from the brink, and reached the second tier again in 2019. They also have one of the most iconic stadiums in the EFL, Kenilworth Road, with entrances built into the surrounding housing estate.

With Elliot Lee and James Collins at the club, it’s hard to look past two up top. There are also a lot of good options at Centre Mid and Centre Half, as well as Bree and Norrington-Davies at Full Back, who are capable of playing further forwards, so a 5-3-2 seems a good option. The only issue is there’s no room for Kazenga Lua Lua or Harry Cornick, so if you wanted to include them, a 4-3-3 DM Wide is your best bet.

Once a staple Premier League team and a team capable of European qualification, Boro have now solidified themselves as a Championship side, for better or worse. A poor season last year saw them finish 17th, so it could be a while before they are back in the top flight, where most fans would argue they belong. If you’re looking for a youth development save, you might want to start here, Boro have a great youth system.

Boro have a lot of quality up front, so playing with a wide front three looks like a good option. In central areas, McNair and Morsy offer solid partnership which should allow your wing backs to get further forward. Another option could be 4-3-3 DM Wide.

Thanks for reading, Part 2 is in the works and will include the remaining 12 clubs in the Championship. After that I aim on making a League One and League Two Club Guide. Hopefully this guide will have given you some insight to clubs in the second tier and maybe guide your choice of club.

Other Articles you may enjoy: